I would like to welcome you all to the CES workshop on the crisis in Ukraine and the future of the Eastern Partnership.

These are dramatic times. In fact, when we in the CES proposed to focus on Eastern Europe in this workshop, we did not know how timely the topic would become. But with every day in recent weeks, it has become clearer that Europe is going through another tectonic shift, like the ones we saw in 1989 and 1991.

Let me, first of all, pay tribute to all Ukrainian citizens, striving for democracy and better life, especially to those who made sacrificies including the highest ones – their lives.

I would like to appreciate also the firm position and wisdom of all political leaders – freedom fighters in Ukraine. Vitalij Klitchko, Arsenij Jacenuk and their friends deserve many thanks and great respect.

I realize that democratic ground in the Ukraine is fragile and unstable. But what is undiable is that an old system of tirany is dyiing and newone is being born.

Taking into a count all risks, potenital threats and dificulties Im convinced that what happened in the Ukraine is hugely positive for all of Europe and will be remembered as a turning point for the better.

So I think we need to remind ourselves of the significance of what has happened, and is happening, in Ukraine now.

I would like to do this in three steps, talking about risk, responsibility and hope.

The risks are obvious. At the moment, even a major military conflict seems possible. To avoid it will demand utmost restraint by all actors, but above all, it is in the hands of the Russian government to de-escalate the situation. But even putting the military situation aside for a moment, there is a distinct possibility of financial and economic disaster – a default of the Ukrainian state leading to widespread disorder. And even if those immediate risks are avoided, there is still a possibility of longer term political instability, and economic stagnation in Ukraine, both mutually reinforcing one another.

Which brings me to my second point, responsibility. Of course, the main responsibility is with the Ukrainian people and their new government. And let me repeat: This means avoiding a civil war, and averting economic disaster, but also not repeating the mistakes made 10 years ago, after the Orange Revolution. In other words, truly transforming Ukraine from sleazy authoritarianism to the rule of law.

But the international community has to play its role as well. That includes the European Union whose rejected offer of a Deep and Comprehensive Free Trade Agreement was the trigger (though not the cause) of the events leading up to the revolution. It includes the United States which has thankfully, if belatedly,  returned to Eastern Europe as a partner. And it includes Russia whose government has, unfortunately and consistently, defined democracy and the rule of law in its neighbourhood as a threat to itself. This cannot continue if we want to build a common European future.

So if responsibility on all sides is the main ingredient to a successful continuation of the Ukrainian story, here is my proposal for the European Union to formulate a message of hope: First of all, we need to engage ourselves much more intensively in Ukraine. That is no criticism of what we have done last year, before the Vilnius summit. In fact, from today’s point of view, to have signed an agreement with Mr Yanukovych would probably not have solved any of the problem Ukraine is facing, at least not in the short and medium term. Nor was it wrong to insist on the freeing of prisoners convicted for obvious political reasons, most of all Yulia Tymoshenko.

Second, a financial collpase of Ukraine has to be avoided, with all instruments at the disposal of the international community.

Thirdly, what we can offer is the experience from the process of transformation  in our eastern member states. Without this process of trnasformation (political, social and economic) europe would not be united. There is a lot of experience in our countries, inclidung my home, Slovakia. In 1997 M. Allbright labeled Slovakia as a black hole of Europe. Seven years later Slovakia has joined the EU and US press wrote about Slovakia as an economic tiger in Europe. This change was possible thanks deep political and economic structural reforms.

Fourthly, the European Union has another instrument at its disposal that has proven successful in the past: Visa policy. To enable the citizens of a transforming country to travel in the EU, to study and do business, can be a crucial element of assisting the Ukrainian government.

And finally, a responsible strategy towards Ukraine will have to entail a stronger commitment to actual EU membership than the ‘European perspective’ that has, until now, been the smallest common denominator among the member states. The EU should express its will to accept Ukraine as a member in the future.

Now, for all this to be possible, we will also have to address an internal aspect: If we are to participate in a bailout of Ukraine, open our borders more widely and reinforce our commitment to  Ukrainian membership, we will have also to take into account the concerns of our own citizens. It will be not easy to overcom enlargement fatique or a strong populistic and anti European movements in some of our countries. But I believe that it is possible and inevitable.

The second central topic of this workshop is the Eastern Partnership of the European Union. This instrument was to support the rule of law, help democracy and human rights, and enhance stability and prosperity in 6 countries of the former Soviet Union that do not have an immediate membership perspective. It has come under considerable criticism, before and after the Vilnius summit. We will discuss this topic after having debated on Ukraine. In fact, I believe that the Ukrainian case holds important lessons for the future of the Eastern Partnership.

Firstly, the EU will have to develop a more long term approach in expecting the results of its policies. That is difficult for democracies such as EU member states which want to produce visible results in short intervals. Nevertheless, it is unavoidable to see that the transformation to the rule of law, democracy and functional market economies takes longer in Eastern Europe than it did in Central Europe after 1989. It will also inevitably experience backslides. And yet, we have to continue

Secondly, in choosing the right addressee of our policies, there must be a shift in emphasis from governments to societies. It is societies that most urgently desire change, not governments stuck in the past and oligarchs that can live well with corruption. Hence, the support for civil society and NGOs must be enhanced. The European Endowment for Democracy is an excellent instrument for that.

Thirdly, what goes for Ukraine in terms of visa policy, is also true for the other Eastern partners. Nothing is as efficient in convincing citizens of the feasibility of modern European governance than actually experiencing it. The same is true on the negative side: Denying visas to human rights offenders, as it was decided very late in the Ukrainian crisis, is also an efficient instrument.
And, fourthly, the EU should grasp the opportunity of enhanced transatlantic cooperation on Eastern Europe. It is of utmost importance that the West acts as one, vis-à-vis Russia and vis-à-vis the Eastern Partnership countries.

These are my initial ideas for our debate. I will now give the floor to Alexander Stubb, the Minister for European Affairs and Foreign Trade of Finland. After that, Roland Freudenstein, the Deputy Director of the CES, will moderate the discussion. Thank you for your attention! 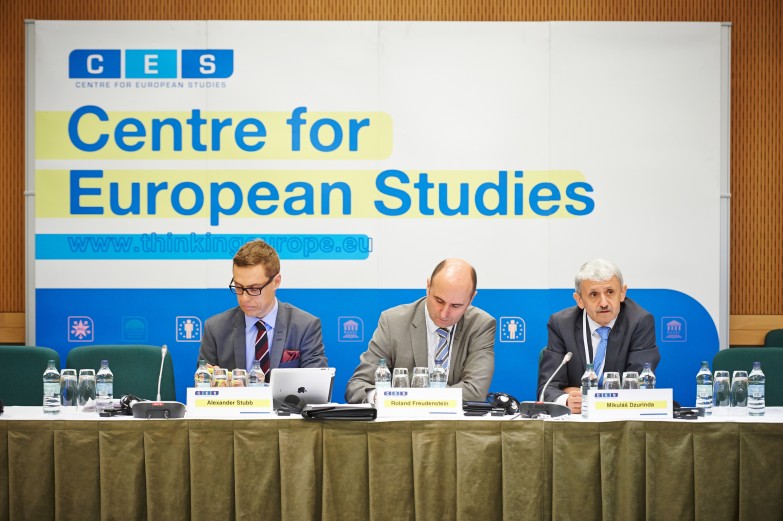