Variations on Europe: Thoughts on Europe – The Legacy of the Founding Fathers in the Europe of Today

Thank you for inviting me to speak at this conference, the first common project that that the Martens Centre is organising with the Antall József Knowledge Centre. I am very glad of this cooperation, and I hope it will continue in the years to come.

Looking back is always a useful exercise. And what better opportunity to look back than the twenty-fifth anniversary of the formation of the first democratic government in Hungary in 1990, under the premiership of József Antall.

Let us remind ourselves that like many other Central European politicians who came to power after fall of communism, Antall had a dissident past. Already in the 1980s, he raised his voice against a dictatorship propped up by Moscow.

The parliamentary elections that took place in Hungary in March and April 1990 were the first fully free parliamentary elections in the Soviet Bloc since the Communist takeover four decades earlier. Also thanks to leaders like Antall, these elections led the way for the establishment of liberal democratic regimes in the whole post-communist region. From then on, government parties would have to compete for the voters’ approval. And if they did not succeed at elections, they would be replaced by the opposition.

Nowadays we consider electoral competition as given. Let us remind ourselves that in 1990 this was a revolutionary change.

But let us not forget that this apparently self-evident freedom needs to be reasserted time and again.

We from the former communist countries consider ourselves lucky to still live in liberty 25 years from those first free elections in Central Europe. We now firmly belong to the West, something that Antall worked on tirelessly when it came to his country. And those of us who are on the centre-right continue practicing Atlanticism in foreign policy, like József Antall did.

For these reasons, the first democratically elected prime minister in Central Europe commands our respect and admiration. And it has been precisely these Antall’s qualities that have put his name on this building of the European Parliament.

Let me also point out that Antall’s liberal conservatism chimes with my own convictions, at least when it comes to the belief in private enterprise and the social market economy and to strong ties with our North American allies.

These convictions also brought Antall in line with the founding fathers of the European Communities who were active decades earlier, Alcide De Gasperi, Robert Schuman and Konrad Adenauer. In the late 1940s and early 1950s, these men dreamt of reuniting Europe. Like these founders of the European project, Antall and his political colleagues in Central Europe, such as Árpád Göncz, Václav Havel and Lech Wałęsa, stood in front of a challenge to resurrect democracy after years of devastation. They all needed to bridge old ideological and historical divisions.

In the 1940s and 50s, the EU’s founding fathers knew they would have to come up with new concepts of cooperation between the peoples of Europe. They knew that a Europe ridden by confrontation and conflict could not continue.

Christian Democrats reunited Europe both in the early 1950s, and after 1989.

In the late 1990s and early 2000s, it was politicians belonging to the EPP family who were behind the expansion of NATO and the EU. I myself contributed to these processes, and other centre-right personalities are with us in this room today.

I think I can say with confidence that we have succeeded, despite all the flaws and all the problems that EU is facing.

The European Union continues to attract new members. The EU’s underlying thought of overcoming national differences through institutionalised cooperation continues serving as a model for regional groupings of countries, from Africa to East Asia.

The Union today is a space for democracy, freedom of speech, free elections and pluralism. Having secured peace among its members, it reached an incredible level of economic prosperity, and is an important global player. The founding fathers would be proud of our Union today. 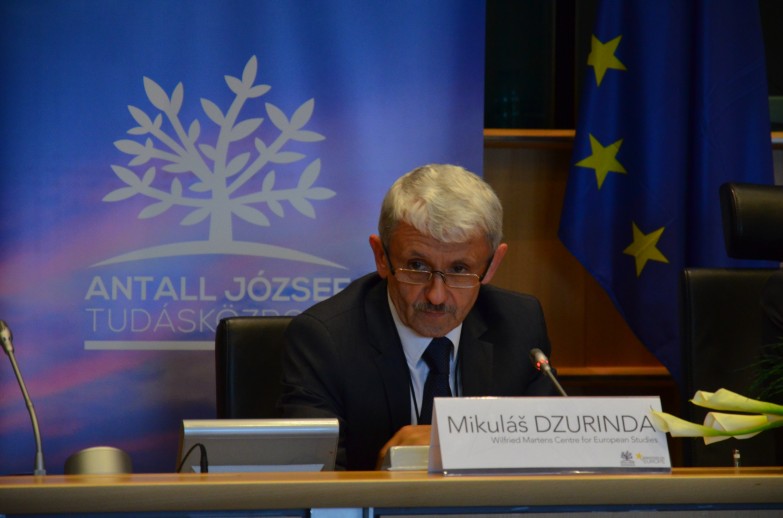