It is an honor for me to start my political year with an appearance here before KAS in the capital of European politics in Brussels. I would like to thank the KAS for this privilege and at the beginning of my speech I wish you a Happy New year!

2014 is a very significant year. Three important events will be remembered during the course of it:

These anniversaries are undoubtedly a powerful incentive to ensure that not only political leaders but also people outside of the political bubble contemplate the future of our continent and the world.

For political leaders the aforementioned anniversaries are inspiration to responsibly shape the future architecture of the once again reunited Europe.

So it is  a home, a cosy abode for all countries, for all peoples, nationalities, ethnic groups. For every one of its inhabitants.

The specified milestones in the history of our countries, of Europe and of the world will be marked at the same time  while the EU is working intensively on new rules for mutual coexistence in the common European house. The new rules have in part been forced to be implemented due to the economic and financial crisis, and also as an effort to succeed in intensifying global competition. We need new rules and effective tools so we can overcome the consequences of the financial and economic crisis with minimal cost to our citizens. And also to help us avoid the errors and mistakes that led to the crisis.

It will not be easy to fine tune an orchestra of 28 players, of which many are convinced that they are the virtuoso. Regardless of what genre is being played…

But many of us feel that changes are necessary, that development cannot be stopped. Personally, I believe that there are still a number of areas suitable for deeper integration.

However, there are also areas in which power should be left to the member states.

In short, I think we need a more effective European cooperation, but also efficient internal competition that will stimulate the development of a united Europe. It is not just the issue of consistent application of the principle of subsidiarity, but also artfully defining tools that could and should inspire leaders at the national level to form effective economic- social models according to local, regional, historical, cultural, and geographical conditions. Obviously, in strict compliance with the agreed rules. In my experience and in my view COOPERATION, COMPETITION and SOLIDARITY should dominate in the EU.

We all feel that these new rules at the European level are needed. For example, for the banking sector. The banking sector should be more durable, less vulnerable, but also sufficiently conducive for business development.

It should be more effective, for example in helping small and medium-sized enterprises. We should not even prevent stricter scrutiny of compliance with the agreed rules.

In this context, the fortcoming introduction of both the Single Supervisory Mechanism and Singl Resolution Mechanism offer concrete evidence of real banking sector reform.

Personally, I support the legal enforceability of compliance with these rules. Equally I consider structural reforms at the national level, in other words in the individual member states to be as important. The world is changing and changing fast. That, which gave work to people 10 years ago, has often ceased to exist.

Only for new ways, new opportunities to be given birth. So I think, that in Europe, it is not only more discipline and accountability which we need, but more creativity and the courage to make the required changes. Only then can we stop the threat of unemployment, particularly among the young. Only then can our economy create the conditions for the creation of new jobs, which I consider the largest challenge in the New Year to a common Europe.

I consider a great challenge in 2014 to be how to manage migration and its implications. The EU and its member states will continue to intensively apply itself to the areas and regions from which refuges come (it will continue to be Africa, particularly the north, but it will also be Syria and other Middle East countries, it will also be regions and countries and military conflicts).

To help solve problems in the regions where they arise is by far the best solution even though it is not an easy prevention. I think, however, that there is also an urgent need to adopt new rules in this area. So that, for example, the institutes of political asylum is not misused for economic objectives and that the accepted migrants integrate effectively with the citizens of the countries that accept them. At the same time, we must ensure a convergance of our asylum systems and proper application of existing rules by the member states. Finally, Europe needs a much better system to regulate labor emigration, to ensure that it does not lose out in global competition of the bright minds that can bring dynamism and new ideas to our societies.

Today it often seems that the project of multiculturalism in Europe is failing. This is also true because instead of making use of individual opportunities, immigrants are some times promoting their interests collectively. Some groups of imigrants set themselves apart.

Instead of contribution to the common good, we some times  witness abuses to the social system of the country. Europe should continue to show migrants its kind face. However, it should also show the necessary courage and determination against those who would want to abuse this kindness.

An undeniably great, maybe even the dominant challenge to the free world, thus also for our European community, is the challenge of security. The duty to prevent attacks like the one of September 11.

Likewise, atrocities such as the attack on marathon runners and spectators in Boston, and most recently the residents of Volgograd. I cannot cover all the existing, open or latent conflicts or future threats. I want to highlight just three essential key factors of our European security:

Prior to the fall of the Berlin Wall the then U.S. President George Bush senior stated his dream, his vision: to make Europe whole and free! Much of that vision has come true. It is amazing how Europe has changed in 25 years! But the work is not yet completed. Neither in the Western Balkans, nor in the countries of the Eastern Partnership.

I believe that this year will continue to see the success story of Serbia, as well as the normalisation of its relations with Pristhina. That Macedonia and Greece will manage to cut the Gordian Knot. That progress will be recorded in Kosovo and Albania and that Bosnia and Herzegovina will also get moving. 2014 is a year of opportunities for these countries and the challenge for the EU with wise, active and responsible policies to contribute to make use of these opportunities

The big challenge for us all is the movement that is taking place on our eastern borders, especially in Ukraine. The EU should take an interest in the positive and in particular the sustainable development of Ukraine. It should not however compromise on its principles and criteria. Only then can the citizens of this country properly orientate themselves.

Because, ultimately, only Ukrainian citizens can decide on their future. The same as we decided our future ourselves, we, Slovaks, but also Poles, Czechs, Hungarians and the other countries of the former communist bloc 25 years ago.

I believe that this year we will also collectively protect and promote human rights not only in our countries, in those countries that aspire to EU membership, but everywhere in the world. That we will be consistent and principled with any country in the world. That we will develop strategic partnerships also with countries where human rights are trampled underfoot or limited, but that we shall be courageous and consistent in the protection of human rights in these countries

We enter the New Year as a rule always with hope, with optimism, with positive expectations. It is good and natural. However, one should admit that we live in troubled times. As if the period of prosperity has been exhausted and that someone to pay for the past prosperity and write out the cheque for the future one is now being looked for. For some time it seemed that the answer to the challenges of the 21st century would be globalization.

Technological development and significant social movements in all corners of the world have indeed led to rapid globalization where the world shrinks and flattens out. Of growing concern and anxiety for people in today’s world is the frequent feeling that there will be ever less space in it for them.

People feel that they are becoming ever more lost in the labyrinth of communication highways and gigantic corporations. That they are losing their identity, their roots, and their traditions. Young people especially nowadays find it hard to find a job and their safe anchorage.
The number of people who place the blame for their own problems on politics is dangerously increasing. Many blame the so-called standard political parties. In my country – and I think it is not an exception – it is fashionable to vote for extremism. Elections are becoming manifestations of revolt, not choice. Militants, extremists and populists are winning recognition. The challenge of EU and of the free world is to offer answers to such trends, to such developments. The answer to the current difficulties cannot be extremism or chaos, as suggested by adventurers. The answer cannot be collectivism as suggested by many, even by reasonable people.

We are rich in experience of collectivism in Central Europe: we all had the same, but the same was very little.  The answer is the protection and promotion of individual freedom, individual rights, but also of the individual responsibility of every person.

Politics that prefers honours a healthy lifestyle, but also a real solidarity for those who are able to create values with those whose handicaps prevent or limit them from creating these values.

I think an important and serious test of the current trends will be the forthcoming elections to the European Parliament. It is an enormous challenge for all responsible European leaders to try to influence the current trends. To join in the efforts of combating populism. Regardless of whether it comes from the left or right. The recipes of how to respond to the challenges of today may be various. They might be offered by the right or left, but the ingredients should be the same in each case. Thus, first of all they must be healthy. These wholesome ingredients are the values ​​of our Western world, but they are also universal values​​.

These values ​​should be unconditionally return to, and these values ​​are to be held to. As did Konrad Adenauer, Alcide de Gasperi, Robert Schuman, or even Helmut Khol, Francois Mitterrand, Margaret Thatcher, Wilfried Martens, and Ronald Reagan.

If we stick to these traditional universal values, we can find the right answers to the challenges of not only the present, but also to those we will face further down the road.

Thank you for your attention! 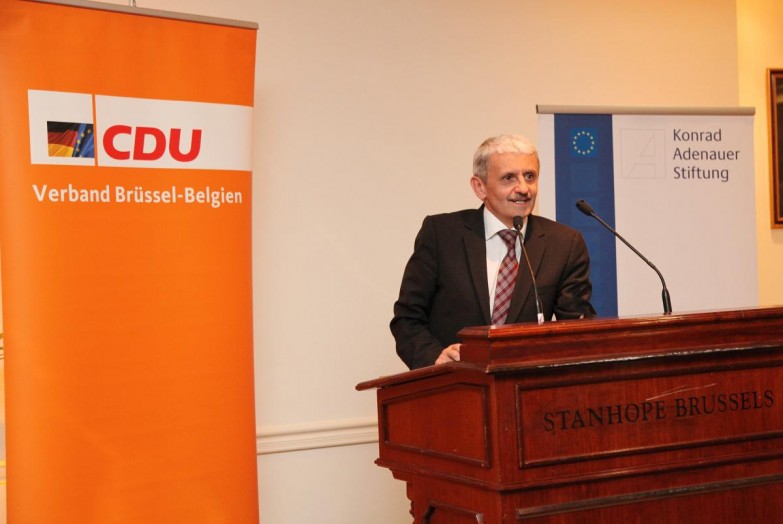